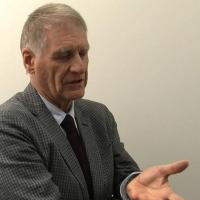 Keith Jenkins (1943) is a British historiographer. Like Hayden White and "postmodern" historiographers, Jenkins believes that any historian's output should be seen as a story. A work of history is as much about the historian's own world view and ideological positions as it is about past events. This means that different historians will inevitably ascribe different meaning to the same historical events. Nevertheless, all historians are constrained by the common body of historical evidence (or "artifacts").

Jenkins retired from the position of professor of historical theory at the University of Chichester in 2008. He is the author of Re-thinking History (1991), On "What is History" : From Carr and Elton to Rorty and White (1995) and edited The Postmodern History Reader (1997), the author of Why History? Ethics and Postmodernity (1999). With Alun Munslow he co-authored The Nature of History Reader (2004), in which key pieces of writing by leading historians are reproduced and evaluated, with an explanation and critique of their character and assumptions. A theme issue of the journal Rethinking History was dedicated to his work[1] and a critical account has been published by Dr Alexander Macfie in June 2012 in Reviews in History,[2] a publication of the Institute of Historical Research.