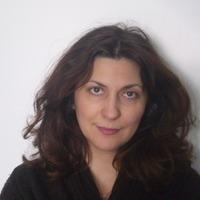 University of the Peloponnese
Greece
historiography
Biography and/or project

I hold a BA in English and Greek Literature from the University of Athens; a Master’s Degree in ‘Critical Theory’ from the University of Sussex; and a PhD in the area of English and Comparative Literature also from Sussex University, School of Humanities (Supervisor Prof. Laura Marcus).
I am currently Assistant Professor of Modern European Literature and Theory at the School of Arts, Theatre Studies Department of the University of the Peloponnese, Greece, and a Visiting Research Fellow at the School of Advanced Studies-University of London, Institute of English Studies.
Since 2001, I have also been a tutor at the Hellenic Open University, teaching the course ‘History of European Literature, ‘ one of the textbooks for which I have co-authored. Previously, I taught English literature and Cultural Theory at Athens University (English Dept., 2006-2008); and as a visiting professor of the Erasmus exchange programme, I have also taught at the Instituto del Teatro in Barcelona; the Accademia di Belli Arte di Venezia; the Academy of Performing Arts in Prague (DAMU); Bogazici University; and Goldsmiths College-UoL.
I have also delivered guest lectures at Paris College of Art and research seminars at Université Paris VII- Denis Diderot,and Goldsmiths College-University of London. In 2013-14, I was a visiting researcher at Université Paris III- Nouvelle Sorbonne .
Since 2016, I convene a new Research Seminar Series and related events on ‘Comparative Modernisms’ at the School of Advanced Study, University of London.
My research interests are: Modern and Contemporary European Literature, especially English; Virginia Woolf and Walter Benjamin; Theory and History of Literature and Drama; Critical and Cultural Theory; Gender studies; History/ historiography; Modernism and Modernity.